Bring out the archaeologist in you this holiday season and set out to explore the majestic splendor of the heritage monuments and sites in India. The monuments and sites with reminiscences of a royal past await the traveler who has the inclination and the time to `stand and stare’, in all amazement. The country which has heritage locales throughout its length and breadth will startle you, amaze you and blow you over with their beauty. 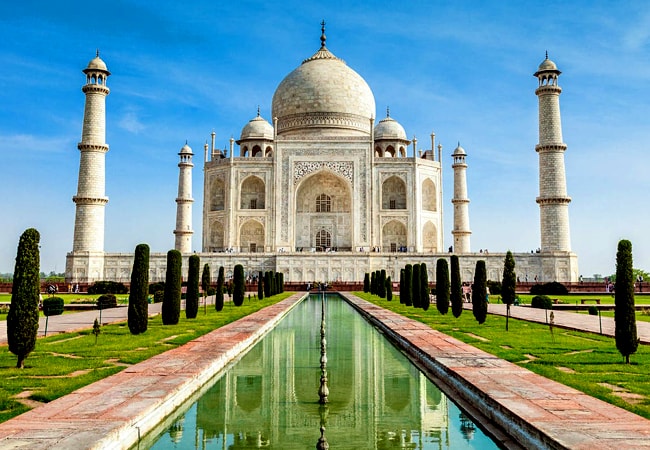 Rightly called a `Poem in Marble’, the Taj Mahal, located in Agra is one of the most cherished heritage sites in the country with a population of over 10 lakh tourists visiting the place every year. The Mahal, which was constructed by the Mughal ruler Shah Jahan in 1631, to enshrine the body of his beloved wife, Mumtaz Mahal is now known the world over as a symbol of eternal love. The Mahal has onion-shaped domes and flanking towers with inlaid marble works which have resisted corrosion over the centuries. The monument stands on a 22 feet high platform with the central inner dome which is 81 feet high and an outer shell that reaches a height of 200 feet.

Many travelers gaze at the monument in utter amazement even as it displays splendid Islamic architecture of the period which was complemented with the inland construction works of the period. The place can be reached from Delhi which is 253 km away on road. The nearest airport is also Delhi airport.

The sculptures lining the walls on the temples ooze with passion, eroticism, dance, and music, indicating the rich pagan tradition in medieval India which went missing after the institutionalization of religions. Located in Chatapur village of Madhya Pradesh state, the place finds a mention in most archaic literature of the country.  The place is easily accessible as it has daily flights from Agra, Varanasi, and Katmandu. The nearest railway stations to the place are Mahoba, Satna, and Jhansi.

On a serene island far from the mainland of the port city, Mumbai, stand four temples that were built in the open mouths of caves during the period of 350 to 750 AD. Known as Elephanta caves due as the first sight which set foot on the island will be the carved structure of an elephant.

The caves through the corridors of which one can easily walk have huge carvings which were able to withstand the ravishing invasions of later periods. The entire, cave temple complex covers an amazing space of 6,000 sq ft. Located 10 km from the Mumbai port, the island and the rock temple can be reached through local ferries which are available during the day. The nearest airport is Mumbai International Airport which is just 40 km away.

The fort with its trenches, huge cannon chambers, arms and artillery storage sites, long corridors, and spacious interiors would bring to you the smell and the heat of a battlefield. Another monument built by Shah Jahan, the fort is four centuries old. The largest of Old Delhi’s monuments, the Lal Quila or the Red Fort whose thick red sandstone walls, bulging with turrets and bastions, have withstood the vagaries of time and nature stand sprawling right in the middle of labyrinthine lanes awaiting the curious traveler. Its walls extend from two km and vary in height from 18 meters on the riverside to 33 meters on the city side.

The other attractions within this monument are the Royal Baths or Hammams, the Shahi Burj, which used to be Shahjahan’s private working area, and the Moti Masjid or the Pearl Mosque, built by Aurangzeb for his personal use. The Rang Mahal or the “Palace of Colours” housed the Emperor’s wives and mistresses.

The magnificent Sun Temple at Konark, Orissa is the culmination of the region’s temple architecture, and one of the most stunning monuments of religious architecture in the world. Known as a world heritage site, the temple resembles a colossal chariot, with seven horses and twenty-four wheels carrying the Sun God, Surya across the heavens. Built by King Narasimha, a Kalinga Ruler in the 13th century, the temple still remains with little damage to its main structures.

The Temple is located in natural surroundings, abounding with Caesarians plantations and other types of trees, which gives the locality a fresh feel. The nearest airport to reach Konark is at Bhubaneswar which is 64 km away. Puri is the nearest railway station which is 31 km away. Konark is well connected by roads to Puri, Bhubaneswar, and other major cities of Orissa.

Himachal is an area of enormous beauty and charm, with clear and tranquil ponds, elevated hills, old temples, and gay individuals. Home to some of Kullu, Manali, Chamba and Shimla's finest tourist spots, Himachal is an earthly paradise that invites visitors all year round. Himachal's natural beauty, the mountains, and the valleys render your journey tranquil, while the pilgrimages render the count...

Gujarat is one of the most popular tourist destinations in India. This erstwhile kingdom of Lord Krishna is a Pandora box of adventure and spiritual experiences in one. From the Somnath Mahadev Mandir and Dwarkadhish temple to the Gir and marine national park, Guja...

Things To Do In Darjeeling

Darjeeling is a peaceful little hilly hamlet that is known for being blessed by the snowcapped peaks of Khangchendzonga. Settled in the eastern Himalayan region, Darjeeling is the place where spirituality and Zen meets adventure. It is a Pandora box of travel goodn...

Tucked away in the westernmost coast of the Indian subcontinent, is one of the holiest lands in the world, Dwarka and Somnath. A place where gods walked, which was once covered with palaces of gold and was blessed with absolute peace, Dwarka and Somnath are two of ...