Tucked away in the westernmost coast of the Indian subcontinent, is one of the holiest lands in the world, Dwarka and Somnath. A place where gods walked, which was once covered with palaces of gold and was blessed with absolute peace, Dwarka and Somnath are two of the most legendary and historically rich destinations in not just Gujarat but in India as well. Dotted with ancient temples against the lashing waves of the Arabian Sea, Dwarka and Somnath are two places in Gujarat that will guarantee you a lifetime of experiences and memories. A Dwarka Somnath Tour Package will be the perfect gift for your family!

Things to Do In Dwarka

Both the cities are famous for housing numerous temples and spiritual places where tourists can visit and show their unflinching faith in gods and goddesses. Two of these cities are named after famous temples – Dwarkadhish Temple and Somnath Temple.

Situated in the southern shore of Gujarat, on the gulf of Kutch and just an hour away from the landmark temple of Dwarkadhish, the Marine national park is a must visit. This is the first marine based national park in India and is a sanctuary for hundreds of varieties of flora, fauna and aquatic species like sponges, star fish, arthropods, sea cucumbers, corals, reefs and more. The national park is a collection of 42 islands, out of which only a few of them are open for visitation and can only be accessed through boats.

Explore the Island of Beyt Dwarka

Located off the coast of Dwarka and reachable via Okha, Beyt Dwarka is one of the holiest places in India. Beyt Dwarka was once the official place of residence and kingdom of Lord Krishna. Also referred to as Shankhdhar, the term Beyt translates into ‘a gift’ which is how the history goes as Sudama is believed to have gifted it to him. A part of the Beyt is located on the island but a majority of it is underwater that remains to be explored more. The glories of Lord Krishna can be witnessed at Beyt Dwarka during the holy festival of Janmashtami.

Situated in Jamnagar district and home to over 300 species of migratory birds, the Khijadiya Bird Sanctuary is a Ramsar site and a must visit during your Gujarat visit. The sanctuary is unique for holding freshwater lakes, salt as well as freshwater marshlands. This bird sanctuary covers a massive area of 1500 acres and hosts a variety of birds from all over the world. During the winter months, flocks of birds from across the globe like grey hypocolius, forest wagtail, goose, pelican, flamingos etc. put on a colourful and vibrant show for the visitors.

Catch the Sunset at Bhadkeshwar Mahadev

Situated off the banks of Dwarka is a Shiva temple that reveals itself for Darshan only when the ocean tides lay low. Located on top of a tiny hillock on the Arabian Sea, the temple offers one of the most stunning and unobstructed views of the blue ocean horizon for as far as the eyes can see. Go there during the holy eve of Maha Shivratri when devotees flock for the grand Darshan and Aarti experience. During the peak monsoon months of June and July, the ocean can be seen performing a natural Abhishekam to the Shivling inside the temple.

Relax at the Dwarka Beach

Gujarat boasts of a massive 1,500 km long coastline, this western most state is lined with several beaches. After a full day of Darshan and exploring the Dwarkadhish Temple or other Dwarka tourist sightseeing places, one can come to the Dwarka beach to watch the sunset or just relax with your family and loved ones. One can eat on the several numerous available eating joints and indulge in fun activities like came rides along the beach. If you’re lucky and spend enough time on the beach, then you may even spot the vibrant aquatic life of the beach.

Dwarka is one of the most vibrant cities in Gujarat and shopping here is surely a bliss. When in Dwarka don’t forget to shop for souvenirs or gifts for people back home or even for yourself. The culture and traditions followed in Gujarat are very unique and well preserved through various art forms. So you can buy souvenirs such as handicrafts items, traditional textile clothing, Gujarati Folk Jewellery, idols of lord Krishna, Patola Silk Sarees, embroidered footwear, religious items etc.

Things to Do In Somnath 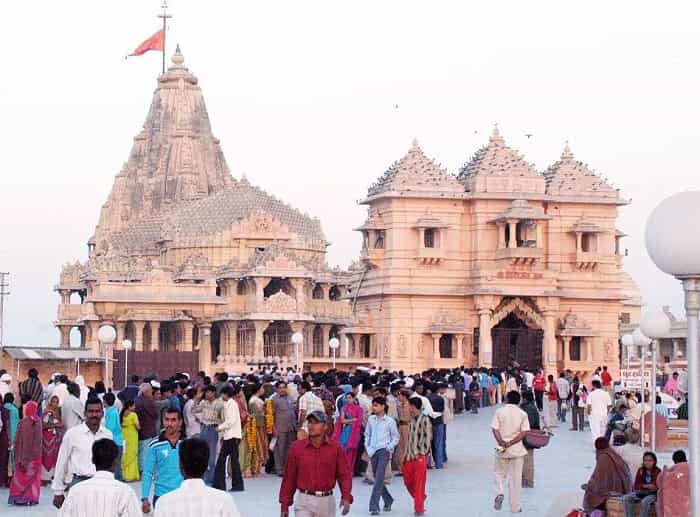 With the foundation stone for the temple being set between 1st millennium to 9th century CE, Somnath Mahadev Temple is an iconic mark of engineering marvel in the Prabhas Patan region of Gujarat. Dedicated to Lord Shiva who is worshipped here as the lord of Somnath, the temple stands just next to the crashing waves of the Arabian Sea. It is a grand temple complex complete with a museum and regular sound and light show. Being one of the Jyotirlingas, the Somnath Mahadev Temple witnesses a huge devotee footfall throughout the year and it only increases during the Shiva festivals like Mahashivratri.

Spend Time at the Chorwad Beach

After spending a day out for Somnath Darshan, spending time at the Chorwad Beach will be a deeply relaxing experience. Chorwad Beach offers a serene and tranquil environment in the middle of the chaos of the city. Although swimming here is not recommended, one can sit back here, try out some simple activities and just watch the sun setting in the horizon. It is easily reachable and a must visit if you are looking for ways to spend time with your family and relax in Somnath.

Located just 300 metres away from the Somnath Mahadev Temple, Prabhas Patan is an archaeological museum that is managed and maintained by the government of Gujarat. The museum was established in 1951, displaying over 3,500 precious and ancient objects that are exhibited in 3 different categories. Famous for stone sculptures, inscriptions, reminiscent pieces of ancient temples, pillars, domes etc. The museum offers a glimpse into the rich history of Gujarat. There are glass containers holding waters from rivers like Tigris, Danube, Nile, Murray etc. and coins from different times that shows us how Gujarat has always been the centre of trade and commerce.

The Sana Buddhist Caves is a set of 62 rocks cut caves which is spread across the hill, complete with Stupas, Chaityas, pillows and benches. These are a series of manmade caves that were carved out by Buddhist monks. The largest among these is cave no. 2 that also goes by the name of Bhima-ni-cori. According to archeological findings and readings, the cave was carved out between 1se century BC and 1st century AD as a shelter to keep the meditating Buddhists from getting drenched during the rainy season. The presence of these caves also indicated how widespread Buddhism was in India.

Situated just 1.5 kms away from the Somnath Mahadev Temple, the Panch Pandav Gufa is another interesting cave complex in Somnath. Located close to the Triveni Sangam, the Panch Pandav Gufa is an important place of pilgrimage for many devotees. This set of caves was accidentally discovered by baba Narayandas in 1949. Also known as Hinglaj Mata Mandir, it is believed that the Pandava brothers had made their way here to worship the Hinglaj Mata. The cave temple is dedicated primarily to the Pandava brothers but there are shrines dedicated to Lord Shiva, Lord Ram, Lord Laxman, Lord Hanuman, goddess Sita and goddess Durga.

Located in the Veraval part of the Saurashtra region of Gujarat, Bhalka Tirth marks the place where lord Krishna had left his earthly body for his heavenly abode. It was here that a hunter named jara had mistaken the sleeping Lord Krishna for a deer and shot him with his arrow. Along with Mathura, Vrindavan, Barsana, Govardhan, Kurukshetra and Dwarka, Bhalka Tirth also forms one of the major parts of the Krishan pilgrimage circuit. This Tirth location is situated 4 kms away from the Somnath Mahadev Temple and makes for a must visit for everyone travelling to Somnath. Being one of the most important places of Lord Krishna’s life, it can also be easily reached.

Q. Which Is The Nearest Airport To Dwarka?

Ans. The nearest airport to Dwarka is located 137 kms away in Jamnagar.

Ans. The Somnath Mahadev Temple was looted by the Mahmud of Ghazni 17 times.

Q. When Is The Best Time To Travel To Dwarka Somnath?

Ans. October to March is the most pleasant and the best time to visit Dwarka Somnath.

Q. Why Is Shiva Referred To As Somnath?

Ans. Somnath is referred to the lord of moon incarnation of Lord Shiva.

Q. What Is The Road Condition For Dwarka From Ahmedabad?

Ans. The roads are very well made and in good condition to travel by road. The overall road journey will take about 9 hours.

Gujarat is one of the most popular tourist destinations in India. This erstwhile kingdom of Lord Krishna is a Pandora box of adventure and spiritual experiences in one. From the Somnath Mahadev Mandir and Dwarkadhish temple to the Gir and marine national park, Gujarat is the perfect holiday destination for family vacations. Somnath and Dwarka are two of the most popular cities in Gujarat. The conn...

Have you wrongly overlooked Gujarat when planning a much-needed escape from the monotony of routine life? Has the call of the multitude of its tourist attractions in India not yet reached you? Well, let us tell you about the top ten tourist places in Gujarat. The m...