History and Mythology of Badrinath Dham

Badrinath Dham is an important pilgrimage destination both for Hindus and Vaishnavites. It is a temple dedicated to Lord Vishnu and is the highest of the Chardham in the Chota Chardham Circuit. Also, it is one among the 108 revered Divya Deshams of the Vaishnavites. For those opting for the Badrinath Yatra Packages, this Badrinath Dham information repertoire will be a way to satiate their curious minds. Read on to learn more: 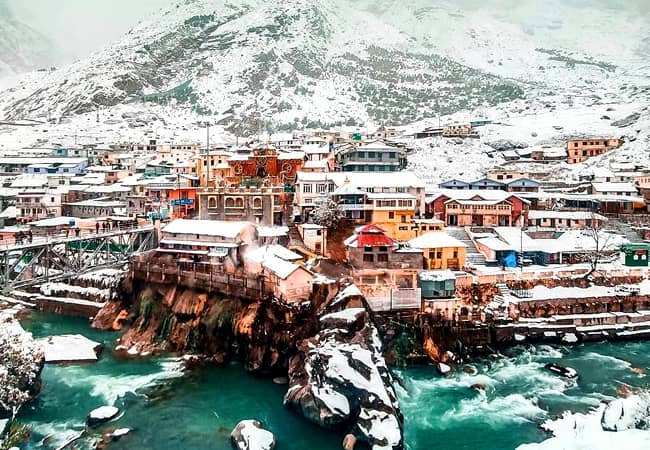 Badrinath Dham; a shrine of Lord Badrinarayan or Lord Vishnu is located in Uttarakhand Chamoli District and in the holy town of Badrinath, set along the river banks of River Alaknanda. The town is cradled at an altitude of 3415 meters above sea level and is nestled under the shadow of the majestic Nilkantha Peak and between the hills Nar and Narayana. The latitude-longitudinal extent of Badrinath is 30.73°N 79.48°E

No proper historical record exists about the temple but there are several tales and a few evidences that allude to the temple’s history to some extent. In our ancient Vedic texts, this temple finds a mention, and the Vedic references talk about the temple’s existence between 1750 BC and 500 BC. In Vishnu Purana, we come across references to the Badrinath temple. According to Puranic tales Dharam had two sons; Nar and Narayana. They were but Lord Vishnu’s incarnations. Nar and Narayana went about looking for an ideal location to build their hermitage. Soon, they came across the location where the temple stands currently and chose it to build their hermitage which later became popular as the Badrinarayan temple.

According to myths, the place where the temple of Badrinath Temple stands now was owned by Lord Shiva and Goddess Parvati once upon a time. Lord Vishnu liked the place very much and wanted to make it his own place. So, he tricked Lord Shiva and Parvati out of that place. The story says that one day when Lord Shiva and his consort returned from a stroll to their dwelling place, they found a little child crying in front of their dwelling place. That was actually Lord Vishnu in disguise. Goddess Parvati’s motherly instincts were awakened when she saw the crying baby and she picked the baby up readily turning a deaf ear to Lord Shiva’s words of caution. She comforted the baby, fed it, and cuddled it. Then after keeping the baby in their house Lord Shiva and Parvati went to bathe in the nearby spring. When they came back, they saw the door locked from within. They lost the possession of their own house to the baby who was but Lord Vishnu in disguise. Thus, Lord Vishnu got the venue of Badrinath to himself. He started his penance at the place and soon established himself as the Badrinarayan.

Some accounts declare that this temple had been a Buddhist monastery before Adi Guru Shankaracharya took it over from the Buddhist monks and converted it into a Hindu shrine dedicated to Lord Vishnu. This incident probably took place around the 8th century. The vibrantly colored frontal façade and the Buddhist Vihara style of architecture of Badrinath temple hold testimony to the above fact clearly. It is often said that Adi Shankaracharya took the help of Parmar ruler; Kanak Pal to empty the monastery of the monks. Other historical records say that the shrine of Badrinath was established around the 9th century by Adi Guru Shankaracharya. The temple underwent several renovations works in the 17th as well as 19th centuries. The current temple is said to have been set up by the King of Garhwal.

The nomenclature of Badrinath Dham is associated with a legend that tells that as Lord Vishnu sat at the place rapt in deep meditation, he forgot about the harsh environmental cold and forgot about the agonies his body was suffering from. Goddess Lakshmi, his consort however took the best care of him during those difficult times and guarded against the extreme weather conditions by taking the form of a huge Badri Tree. The lord recognized her devotion and gave the region the name of Badrikashram. According to historical records, this place was once upon a time full of berry trees.

The temple rises to a height of about 50ft and comes with a vibrantly colored façade at the main entrance. The frontal façade is made out of stone and comes with arched windows. The main entrance is an arched gateway and a broad stairway leads up to the main entrance. The temple comes with three distinct chambers; i.e. Garbha Griha, Darshan Mandap, and Sabha Mandap. The idol of the presiding deity, Lord Badrinarayan along with that of the other Gods and Goddesses of the Hindu pantheon are enshrined within the temple’s garbhagriha. Pilgrims gather in the Sabha Mandap for prayer. It is a spacious pillared hall. The pillars, as well as walls of the hall, are adorned with ornate carvings. Apart from the idol of Lord Badrinarayan, the other idols present in the Garbha Griha include Garud, Kuber, Ganesha, Narad, Nar and Narayana. The temple exhibits the typical wooden Garhwali architecture. The sanctum sanatorium has a conical-shaped roof atop which sits a tiny cupola consisting of a roof of gold gilt. The idol of Lord Badrinarayan is placed under a canopy of gold symbolizing the Badri Tree.

The temple remains open for the devotees from the month of April until the month of November because beyond November there will be heavy snowfall in the region making travel impossible for tourists and pilgrims.

The idol enshrined in the temple is a Shaligram Shila or black stone idol rising to a height of 3.3ft. It is a four-armed idol with the Lord seated in Padmasana or meditative posture. In two of his raised hands, the lord holds a conch and the divine diskette while the other two hands rest on the lord’s crossed legs. According to mythical tales, the idol of Lord Badrinath was retrieved by Adi Guru Shankaracharya from the waters of River Alaknanda. Lord Badrinath’s idol as enshrined is a self-manifested idol of Lord Vishnu.

Special pujas are performed at the Badrinath Temple each day on behalf of the devotees. Every puja ceremony at the temple is to starts with a holy dip in Tapt Kund. The morning pujas at the temple include Mahabhishek, Abhishek, Gitapath, and Bhagwat Path while the Sandhya or evening pujas include Geet Govinda Path and Aarti. It is said that Adi Guru Shankaracharya had documented the daily puja Vidhis for the Badrinath temple and the same Vidhis are being followed at the temple to date. In the temple of Badrinarayan, the pujas and rituals are all performed in presence of devotees. If devotees wish to book special pujas, they can do so by getting in touch with the Badrinath Mandir committee and paying a number of fees.

Every day the rituals at the temple start at around 4.30 am with the Abhishek and Maha Abhishek Puja and end at 9.00 pm with the Shayan Aarti. The Rawal or head priest of the temple performs all the puja and rituals with the assistance of subordinate priests.