India is deemed as the land of spirituality. A million reminders of the Divine abound in every nook and corner of the country. Pilgrimages act as catalysts on one’s spiritual journey. The external journey is a metaphor and mirror of the inner one. That the journey in itself is as important as the destination is nowhere more relevant than regarding pilgrimages. Which are the sacred sites in this glorious land that attract a million hearts to come to visit its premises as to inch a bit closer to the all-present yet ever-elusive Divine? Come, let us explore together. 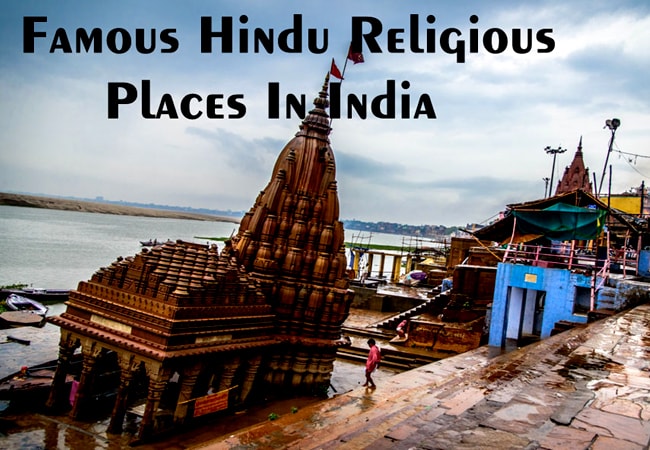 Famed to be one of the oldest inhabited cities of the world, Varanasi continues to remain synonymous with the ultimate pilgrimage one undertakes in one’s lifetime. In fact, the city has been sought out by millions throughout history as the ideal place to die at. Visiting Varanasi brings one face to face with the raw picture of death. This holy city houses perhaps the most famous and sought-after cremation grounds in the world, like Manikarnika Ghat, Dashashwamedh Ghat, Harishchandra Ghat, and Panchganga Ghat. Not all Ghats in Varanasi are used exclusively for cremation rituals though. These stone-built embankments that lead into the waters of Ganga strewn across Varanasi are where millions arrive to perform religious rituals and wash away their sins. Other than the holy Ganga and the many Ghats, the city is famous for its Kashi Vishwanath Temple. In fact, Lord Shiva supposedly considers the city as his own abode. It then comes as no wonder that the God overseeing death is the patron deity of this city where death is deemed holy.

Badrinath is where Chardham Yatra culminates at. Which of the two Char Dham, you might ask? Both, in fact! Char Dham refers to four spiritually potent sites amalgamated under a single pilgrimage course by Adi Shankaracharya. These were originally Puri, Rameswaram, Dwaraka, and Badrinath. Though, another equally reverential but less accessible pilgrimage route of the same name exists in the Himalayas, ‘Chhota Char Dham’ or ‘Himalayan Char Dham’ being the names used to differentiate them from the latter. These include the River shrines at Yamunotri and Gangotri, Jyotirlinga at Kedarnath, and Lord Vishnu’s abode at Badrinath. There are many legends surrounding its conception, the most popular being the one about the story of Nar and Narayan. It is said that the duo, considered as the prior incarnations of Sri Krishna and Arjun meditated upon its grounds for thousands of years to bring in the higher spiritual good for all living beings. Badrinath Temple and its beautiful idol of Lord Badrinarayan continue to attract thousands of true devotees every pilgrimage season.

If you live in North India, it can’t be that you haven’t heard of ‘Maa Ka Bulawa Aana’. This is a popular reference to the call of Mother which devotees receive as an invitation to come to visit her shrine at Vaishno Devi Mandir, Katra, Jammu, and Kashmir. The sacred cave of Shakti is accessible only after a 12 km trek from the base camp at Katra. Instead of typical idols found in most temples, one finds naturally occurring rock-forms called Pindies venerated as the embodiment of Mother inside the sacred sanctum. The sacred cave venerated as Maa’s abode is located in Trikuta Mountain.

The most prominent of all Shasta temples, Sabarimala is situated inside Periyar Tiger Reserve in Pathanamthitta District, Kerala. The temple is unique in many respects, its being open only during Makaravilakku, Mandala Pooja and Chitra Vishu is rather the most important of them. A visit to the temple ought to be undertaken only after undergoing a 41 day fasting period which supposedly cleanses the minds of devotees of all impurities. The path to the temple is through dense forests. It is estimated that over 45-50 million devotees visit the shrine annually, making it one of the largest annual pilgrimages in the whole world. Sabarimala is one among a cluster of 18 hills in the region. Sastha or Ayyappan, the principal deity of the temple, is said to have meditated at the site and merged with the Divine. Ayyappan is considered the son of Lord Shiva born to Mohini, the female form embodied by Lord Vishnu, who grew up as the prince of the Pandalam Dynasty. Since the deity has taken the vow of Brahmacharya (celibacy), women of menstruating age are not allowed entry into the temple premises.

The beautiful Venkateswara Temple in Tirupati is perhaps the richest of all temples in India in terms of donations received. Tirupati is venerated as Kaliyuga Vaikuntham. Devotees believe that Lord Venkateswara would reside in the place as Kaliyuga Pratyaksha Daivam for the whole duration of Kali Yuga.  It is estimated that the origin of the temple dates back to 300 AD. It is said that it is one of the eight self-manifested forms of Lord Vishnu upon the earth. An estimated number of 50,000-100,000 pilgrims pay their obeisance at the temple daily.

Bodh Gaya is markedly the most important Buddhist pilgrimage site in the world, owing to its being the place at which Lord Buddha attained enlightenment. The temple complex at Bodhgaya consists of Mahabodhi Temple and a Bodhi tree, allegedly the descendent of the same tree under which Gautama Siddhartha became Buddha following his 41-day intense meditation. Bodhgaya is also famous for its Vishnupad Mandir, a Vaishnavite shrine that contains the footprints of Lord Vishnu. One cannot describe in words the sheer beauty and serenity inspired by the meditation garden and Lotus Pond in the Bodhgaya Temple complex. Also, this idyllic village contains reverential monuments raised by various Buddhist nations like Myanmar, Japan, Sri Lanka, Tibet, Thailand, etc. in honour of Lord Buddha. The Maha Bodhi Temple in Bodhgaya has been recognized as a UNESCO World Heritage Site.

Ajmer Sharif Dargah is a very renowned Sufi shrine in Ajmer, Rajasthan. It contains the Maqbara (Tomb) of the Sufi saint Moinuddin Chishti. The saint is said to have been a very compassionate and blessed Islamic mystic of the thirteenth century. His allowing the incorporation of music into one’s spiritual practice helped revolutionize the then conventional Islamic approaches to communicate with God. About 150,000 pilgrims visit the beautiful shrine every day. It was said that the pilgrimage was undertaken on foot by Akbar the Great along with his wife. Offering chadar at the revered site is said to bring fulfillment of one’s true Wishes.

Sai Baba of Shirdi is equally revered by Hindus and Muslims. A spiritual icon believed to have been an incarnation of Lord Shiva, Sai Baba taught underlying unity of all religions through the example of his life. Many miracles are attributed to his life. The beautiful temple built over his Samadhi at Shirdi is visited by thousands of devotees to seek His blessings.

Amritsar has become synonymous with its golden temple. It is perhaps the most prominent of all Sikh shrines in India. The Golden Temple founded by the fourth Sikh Guru is built around a beautiful water tank whose crystal clear water reflects the shimmering beauty of the temple. Some names with which the temple is referred include Harmandir Sahib and Darbar Sahib. Just entering its sacred premises immerses one in an unearthly sense of spiritual calm. One ought to take part in its Langar as well.

The Roman Catholic Latin Church in Velankanni is visited by millions of ardent devotees who seek the compassionate embrace of Mother Mary. It is also referred to by the name Basilica of Our Lady of Good Health. The beautiful architecture of the Church is its major highlight. A list of the major pilgrimage sites in India would be deemed incomplete without mentioning this sacred shrine to which people around the globe flock for spiritual sustenance and motherly love.

Gujarat is one of the most popular tourist destinations in India. This erstwhile kingdom of Lord Krishna is a Pandora box of adventure and spiritual experiences in one. From the Somnath Mahadev Mandir and Dwarkadhish temple to the Gir and marine national park, Gujarat is the perfect holiday destination for family vacations. Somnath and Dwarka are two of the most popular cities in Gujarat. The conn...

Things To Do In Darjeeling

Darjeeling is a peaceful little hilly hamlet that is known for being blessed by the snowcapped peaks of Khangchendzonga. Settled in the eastern Himalayan region, Darjeeling is the place where spirituality and Zen meets adventure. It is a Pandora box of travel goodn...

Tucked away in the westernmost coast of the Indian subcontinent, is one of the holiest lands in the world, Dwarka and Somnath. A place where gods walked, which was once covered with palaces of gold and was blessed with absolute peace, Dwarka and Somnath are two of ...

So finally the summer season is again knocking at the door and you all must be bothering for the best place to spend your vacation with friends or family. There is no other place better than a hill station to be visited during the summer season and to escape yourse...