15 Most Beautiful Temples in Nepal

The land of diverse cultures, customs, and traditions, Nepal brings to the fore the original and ancient landscapes of beautiful physical features, amazing sites, and bustling and colorful city life. No other place can offer you the amazing diversity that Nepal has to offer. The rich and vast land is blessed with the Himalayan mountain range which makes it a perfect destination for trekking, hiking, and mountaineering. Travelers and trekkers across the world travel to this heterogeneous and amazing land to experience the Annapurna Base Camp Trekking. Apart from that, the land represents an authentic and bona fide culture of Yoga.

It is a pivot point for Yoga lovers as many renowned schools allure aspiring Yogis and Yoginis to participate in Yoga Retreats in Nepal. The extensive country is exceptionally famed for its old quarters and decorated historical Buddhist and Hindu Temples. Just around the astonishing Kathmandu Valley, there are some beautiful temples in Nepal such as Swayambhunath, Boudhanath, and Pashupatinath. All these famous temples in Nepal make it one of the huge hubs of religious fanaticism. Here in this blog, you can check out the list of some of the amazingly popular well-known temples in Nepal. 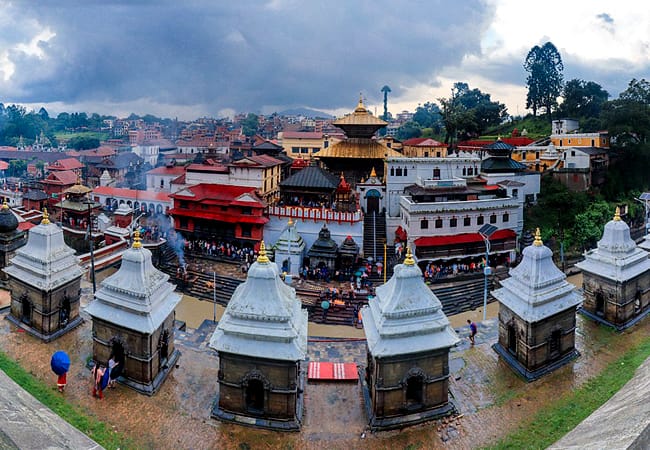 It is one of the most admired, popular, and oldest temples situated in Nepal. Situated on the banks of the tranquil River Bagmati, this Pagoda-style temple represents the traces of a period dating back to 400 AD. The huge and amazing temple almost covers an area of 264 hectares, and the complex temple comprises at least 518 structures. The temple is dedicated to Lord Shiva, and unlike other Shiva lingams, the beautiful idol of this temple is amazingly decorated and dressed in shining golden attire except during the performing of sacred activities.

It is one of the Shakti Peeths and is located near the famous temple Pashupati. Located on the seraphic banks of River Bagmati, this wonderful temple was built in the 17th Century by the popular King Pratap Malla. The architecture of the temple itself represents the divine feminine power of Devi. This Pagoda-styled temple is immensely popular among the Tantrik believers and also brings out the picturesque scenes of the ancient era.

One of the oldest temples in Nepal, as it was built during the reign of the Lichhavi Dynasty. The beautiful temple is dedicated to Lord Vishnu and is designed in a Pagoda shape. It has four doors and is protected by stone lions. Towards the west of the temple, there is a huge statue of Garuda and towards the entrance; the decorated statues of King Bhupatindra Malla and his queen are just positioned in the front. The highlight of this mighty temple is a big statue of Narasingha which represents the half lion and half man features. The architecture and the carvings on the wall of the temple are ancient and antique as it is 1500 years old.

It is one of the best sanctuaries in Nepal. As per the stories of the elders and localities, it is stated that it was founded when the tooth of Sati Devi fell here when Shiva was carrying her body. Here, Danta means teeth, and Kali is referred to as Sati. The beautiful and mythically enriched sanctuary is situated in the center of Hilchowk of Vijaypur in Dharan. You can find so many Yogis here doing yoga and meditation which shows a glimpse of Yoga Teacher Training in India.

Situated in the Gorkha District, this wonderful temple is dedicated to Durga Bhawani. The temple was built during the reign of the popular Gorkha Leader – Ram Singh. An epitome of amazing architecture, the four-storied building is situated on a square pedestal and has a pagoda-styled roof. The temple is accessible after a 10-minute Gondola ride; from Kurinter which itself is a wonderful experience.

The astonishing temple is dedicated to the Goddess Kali. Located near the famous village of Pharping, the temple is believed to be the incarnation of Devi Parvati. Built during the 14th Century, under the rule of King Malla, the charming temple is situated amidst the serene environment disseminating an optimistic vibe all around. The highlights of the temple are its mystical aura, the smell of incense sticks, and the charming scenes of decorated and colorful lights.

The temple creates an amazing and serene aura even though it is situated amidst the fluttering reign. The alluring temple of Maa Durga is situated on a hilltop, at an altitude of 3000 feet, along with the mesmerizing ranges of Machhapuchhare and Annapurna. The Shrine was built by King Bum Malla, which presents the stunning scenes of greenery, amidst the beautiful and panoramic views. Annapurna Base Camp Trekking is only 37 km approx from this place and famous for adventurous and thrilling activities like (Trekking, Hiking, and Basecamping).

Located on the wonderful Shivpuri hills, the Bundhanilkantha Temple is a hub of religious fanatics as people across Southern Asia, visit here to check out its beauty. It represents the biggest stone structure of Lord Vishnu, lying on a bed of serpents. The sculptural marvel statue is carved on a single block of basalt stone and is positioned in a lake which is the representation of the Cosmic Sea. During the Prabodhini Ekadashi, which is held during October and November, thousands of people visit this wonderful destination.

Nestled amidst the dense and mysterious woods, on the serene banks of River Kali Gandaki, this temple is often regarded as the most powerful form of Devi Durga with Lord Shiva. This ancient temple was built by Pratap Narayan and then was renovated in the year 1990. The temple is not only just the meeting points of the Hindu believers but is also believed to be one of the hubs of the Tantra Vidya.

Situated amidst the breathtaking scenarios of snow-covered mountain ranges at an elevation of 3710 meters, this pagoda-style temple, presents an extraordinary scene of Mother Nature. It is stated by the Tibetan Buddhists that this wonderful temple holds a position in the list of 24 tantric famous tantric places. Svayam Vyakta Kshetras is one of the popular and holy shrines of Muktinath. The place presents wonderful scenarios of the ethnic and ancient Tibetan Culture.

Nestled on a hillock, in the Kathmandu Valley, this temple presents an astounding scenario of the fluttering city as well. In that region, it is one of the oldest and holiest Buddhist Stupas. The walls of the Stupas are carved with inscriptions that state that it was built by King Manadeva in 460 A.D. On the top of the Stupa, there is an amazing representation of the 13 stages of Nirvana and on each of the sides, there is the Pancha Buddha Statue which represents the five different qualities of Lord Buddha.

Located in the Mithila region, the mighty white temple is dedicated to Sita. Built-in the year, 1910, by the Queen of Tikamgarh, the grand temple is full of astonishing architecture, beautiful domes, huge verandas, and colored and shining glasses. There are around 40 chambers, which include charming and alluring carvings as well as wonderful paintings of Devi Sita.

This beautiful site is one of the legendary Buddhist temples and also holds a position in the list of declared world heritage sites by UNESCO. This site is considered to be one of the popular holy sites as the archaeologists, have identified the exact spot where Queen Maya Dewi gave birth to Gautam Buddha. The amazing architectural site is considered to be the heart of Lumbini.

The stupa is 36 meters which makes it one of the tallest stupas in Southern Asia. It looks like Gyantse of Tibet; the stupa is shaped like a Mandala. It was built around AD 600 and then was renovated during the Licchavi era during the 8th Century. This stupa is also acclaimed as a world heritage site by UNESCO.

These are the top 15 beautiful temples in Nepal that are a must-visit if you happen to visit the land of the Himalayas. Marvel at these unique pieces of architecture and travel back on time to the ancient ages.

It is a known fact that people who love to travel also love to make every trip a memorable one. There are easily two ways of doing it. One, photographs of the place, reminding you of all the places you’ve been to, and secondly, getting a souvenir back to forever remind you of the place. It is easily one of the easiest ways of getting back something and holding onto it, forever, in your memory. ...

Nepal is home to Mount Everest, also known as Sagarmatha or the roof of the world. It is lined all over with fun trekking experiences. A typical Nepal tour package will include treks, hikes, shopping, and sightseeing experiences, mainly because a trip to Nepal rema...